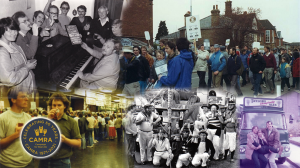 When four young friends went on a drinking holiday to Ireland in March 1971, they had no idea that their idle notion of starting a campaign to push for better beer choice would capture the public mood and grow into Europe’s biggest single-issue consumer movement. In its landmark 50th year, CAMRA celebrates how a group of beer lovers turned an industry on its head, saved this country’s unique beer style, for and became the voice of the beer, cider and perry consumer. The following corrections to 50 Years of CAMRA have been brought to our attention and we apologise to any individuals affected by the error.

You're viewing: 50 years of CAMRA: Celebrating 50 years of the Campaign for Real Ale £12.00
Add to cart
We use cookies, which are small text files, to improve your experience on our website and to show you personalised content.
You can allow all cookies or manage them individually.
Manage cookies Accept
⚙

Please remember to log in to get your member discount! Please note - all MEMBER discounts will only show at CHECKOUT. Dismiss